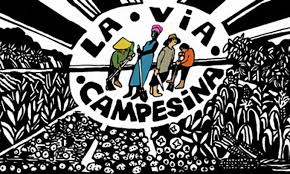 The International Peasant Movement La Via Campesina and it’s members, the European Coordination Via Campesina (ECVC), together with Japan Family Farmers Movement (NOUMINREN) are calling for an immediate end to the negotiations for the Free Trade Agreement between the European Union and Japan. The undersigned peasant movements stand for Food Sovereignty as a base for public policies related to food and agriculture.

Across the European Union and in Japan, transnational corporations (TNCs) are using their grip on governments to impose another so-called “free” trade agreement that will make life worse for the peasants of all affected nations. Launched in 2013, the EU-Japan FTA has already gone through 18 rounds of highly secretive negotiations.

When it comes to farmers and food systems, agribusiness TNCs from Europe – which already export about 5.3 billion euros in agri-food commodities to Japan – expect the deal to end tariffs and regulations on Japan’s agricultural products and processed foods, worsening the already disastrous effects of the corporate food system.

European food companies want to sell whatever they can in Japan and the EU claims that the exports to Japan could solve the problems in its dairy and pork sector.

We, the peasants of the world, know that these false promises will not improve our lives. We have nothing to gain with this type of export agriculture, and will instead be forced to compete with the same subsidised corporate commodities that are currently poisoning the people of this planet while displacing peasants everywhere.

The global peasant struggle against the WTO helped bring this organization into paralysis, stranded the TPP and TTIP, and our campaigns and mobilizations around the world continue to educate our fellow citizens about the threats to our food systems written into each and every FTA.

Under these circumstances, the EU and the Japanese government, as the guardian of “free” trade, are promoting the EU-Japan FTA. We, peasants and small family farmers across Europe and in Japan, together with all of La Via Campesina, demand an end to this desperate attempt at another FTA, and instead call for Food Sovereignty Now!

“Japan’s Abe government even sacrifices its people and domestic industries for the profits of TNCs, with agriculture and food as main targets. The EU-Japan FTA will significantly increase agricultural imports, inflicting extreme hardship on family farmers. The deal could even go beyond the TPP, the worst-ever agreement to destroy agriculture. A further devastation of Japan’s agriculture will make it difficult for the ordinary people to stably obtain safe and affordable food, thus threatening their lives. Japan is the only country with a population of more than 100 million and a food self-sufficiency rate of less than 50%. If Japan further rely on imported foods and take food away from other countries, stable food supply around the world will also be hindered and poverty and the gap between rich and poor will rise. Food Sovereignty is a solution to rebuild local markets which have been deteriorated by the global market economy and the outdated food security insitutional framework.” says, Yoshitaka Mashima, Vice Chair of NOUMINREN.